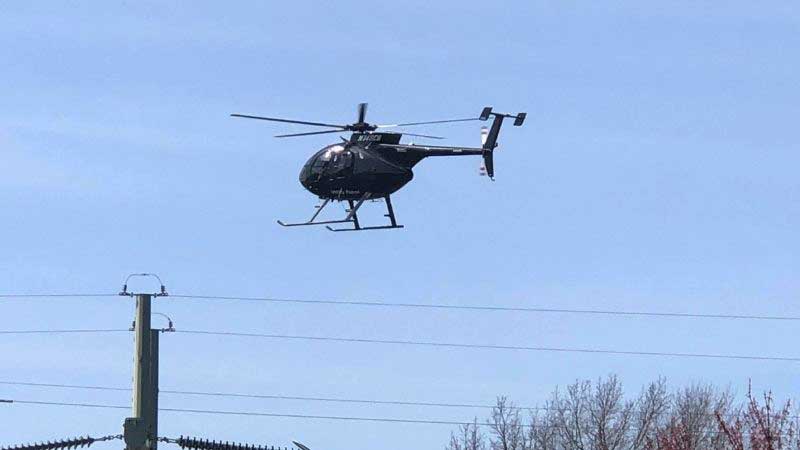 Why Are Helicopters Flying Over My House? Explained!

Usually, it is hard to go unnoticed because of the hefty sounds a helicopter makes while flying over your house. It may make you concerned, or you may find it curious to know why that is happening.

Well, don't worry about it at all. Because there is a security reason for this. It is mostly because of law enforcement monitoring purposes, or else you might live in a military flight path zone.

However, there might be some other causes behind this as well. Nevertheless, in this article, we will walk you through the most common reasons for them. So, let's find out.

How to know what type of helicopter is this? 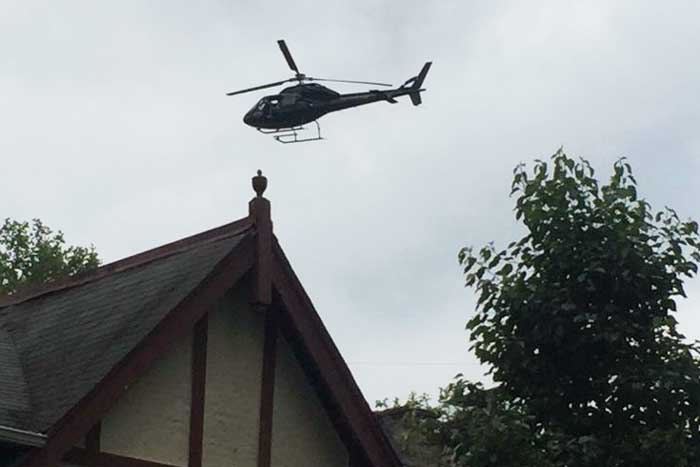 Usually, civil helicopters consist of various colorful body structures to catch the attention of the people. Mostly orange, white, blue, yellow and some other bright colors. The shape of the helicopters are quite small and they are able to carry around 5-7 passengers. 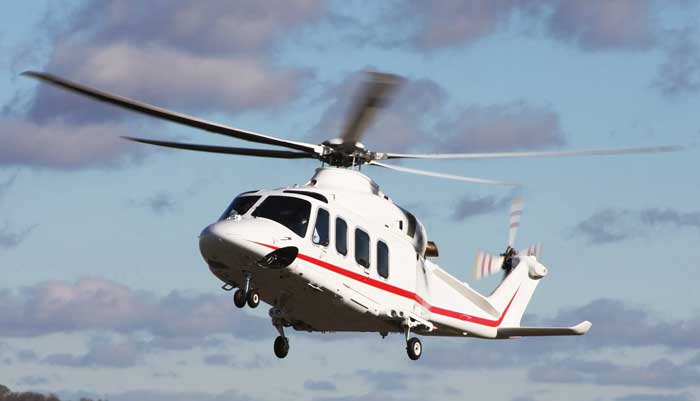 The color of a military helicopter is basically dark. For example, black, dark green, dark blue etc. A military passenger can carry more than 55 passengers. On the other hand, military helicopters usually fly around their path zone. But still, you might find them flying overhead for various purposes like medical evacuation, search and rescue, reconnaissance, etc.

Some of the examples of those helicopter models are Bell AH-1Z Viper, Eurocopter Tiger, Kamov Ka 50, etc. So, these are the commonly seen helicopters flying over residential areas for different tasks.

Why is a helicopter flying in circles over my house?

There might be several objectives of doing that. Because the crew of the helicopter has to respond to a wide range of tasks. For instance, looking for suspects or finding missing persons or vulnerable stuff, etc.

Additionally, if it's a news helicopter, then it might be covering some potential incidents in between that zone. On the other hand, a police helicopter provides a variety of assistance. For example, crime detection and prevention led by intelligent high visibility petrol, offering necessary assistance on the ground, etc. 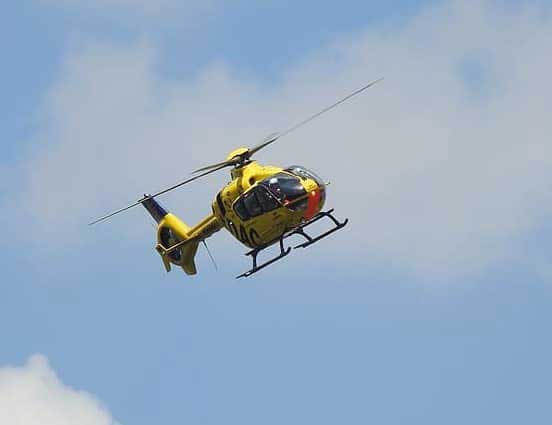 Mostly, police pilots fly the helicopter with an orbital range of 600-1000 ft above the target. They keep the airspeed around 60kts. As a result, the camera operator gets the best possible monitoring flexibility of the zone.

Additionally, the altitude is appropriate to get a proper view of the area and reduces noise pollution as well. If the zone is comparatively small and the target is fixed for monitoring, then helicopters fly in circular orbit patterns.

On the other hand, if the area is larger and the target is moving, then helicopter pilots fly in an oval pattern. So, now you know why helicopters sometimes fly in circles over your house.

Why are police helicopters flying over my houses?

Well, it is not the most unusual sight to notice a police helicopter hovering around the area and sometimes flying over your house. If you are to see one, the last thing you need to do is to panic and do anything stupid. There are plenty of reasons why a police chopper is on the fly. 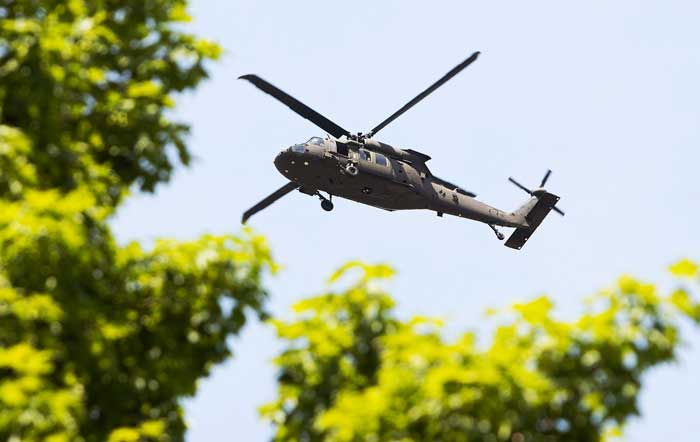 There is no fixed route for helicopters, especially for the police ones, so it is natural for them to fly over your house occasionally. Sometimes it might be just someone important flying for a luxury occasion but never mind. If you are too keen to know the reason, just ask the local authority.

Why are military helicopters flying over my houses?

The military includes the Army, Air Force, Navy, National Guard, Coast Guard and all of them use helicopters more or less. Even sometimes the police use extra military labeled helicopters. While most can get frightened while a military chopper is roaming over, they are most certainly not to hoard your house.

If you happen to see a military chopper flying over your house, it is safe to assume that there is a military base or training facility nearby. After all, the most common event in such cases is that training operations are being held, resulting in flying over residential premises. They might also happen to head back to the base after any substantial duty. 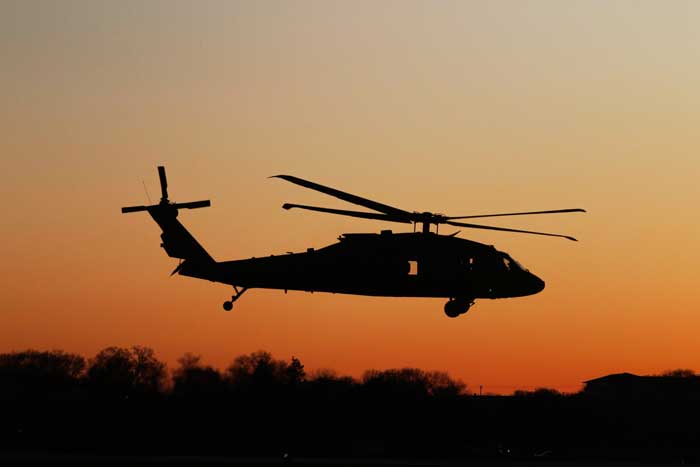 Rarely is it the case where one or multiple military helicopters are seen flying over and stalking out and invading any property to catch the bad guy(s). It might be the president or the home minister attending a local ceremony under strict military supervision, you can never know.

Enforcing the law is the ultimate reason why a military copter is flying over your home, so don’t bother restricting, rather try to help by reporting any suspicious activities if you can. Although they are equipped with thermal equipment and spotlights, they won’t necessarily be peeping inside your house, so rest easy.

Why do helicopters fly low?

The helicopters fly low because they can, as simple as that. The helicopters are primarily used to fly at shorter distances quickly, so ascending to a high altitude is a waste of time and fuel when they can breeze past just a little over your head.

The FAA(Federal Aviation Administration) regulations allow helicopters to fly in a much lower sphere than other aircraft. An aircraft is to operate over at least 1000 feet in a populated area and a minimum of 500 feet over any non-congested area barring open water. However, choppers are allowed to fly much lower. 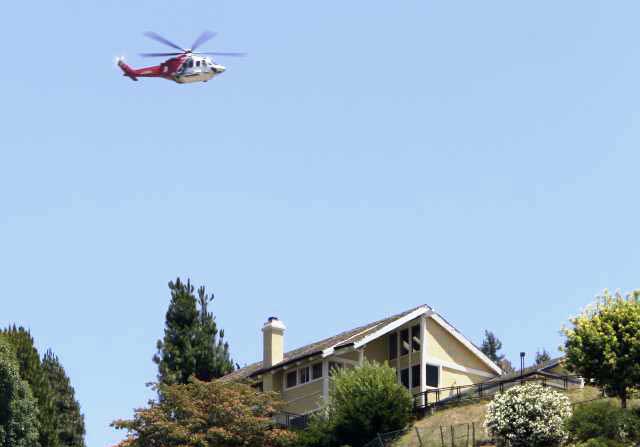 They are allowed to fly at any altitude if there is an emergency. If you think it’s flying too low, it might be en route to landing. Usually, choppers fly at a low altitude to avoid air traffic and better sight for operations.

There can be cases where it is trying to not get detected or keep away from bad weather. If it’s a police or military helicopter, it might be involved in rescue or medical assistance or evacuation or pursuit, and they are likely to fly lower for better benefits.

They are handled by experts, easily controlled, and much slower to be operated at a lower height. Even if you’re disturbed by the uncomfortable noise, you’re safe enough and not to be concerned.

We are certain that now you are well aware of the common reason why you find helicopters flying over your houses. Be assured that the reasons are quite safe and considering the security of the residents. If you still find it concerning, we suggest you contact the law enforcement authority to be reassured.

Marginal VFR: Flight Rules and Comparison With VFR, IFR
Can pilot wear glasses?
Can You Be a Pilot If You Have Asthma
Android Alternatives to Foreflight
How To Build A Home Flight Simulator From Scratch (A Step-by-Step Guide)
Piper Archer vs Cessna 172: Which One is Right For You?
Becoming a Pilot at 30: Age Is Not a Barrier
How to Become A Bush Pilot? For Complete Beginners
Load Meter vs Ammeter: How do They Compare
How to Become a Private Jet Pilot?