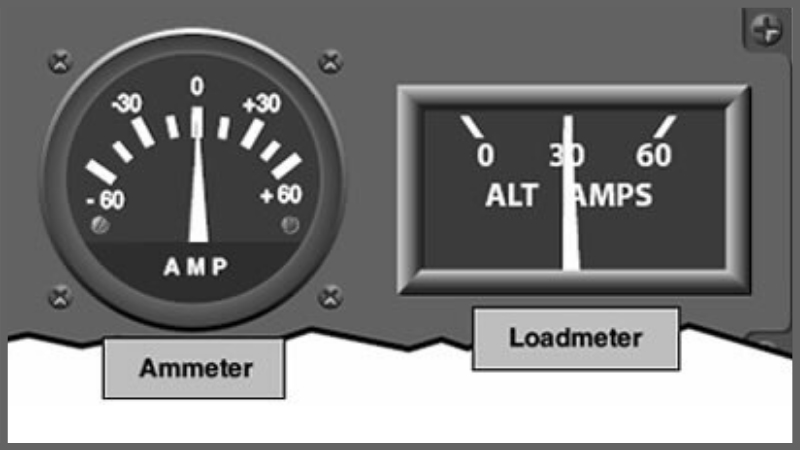 Load Meter vs Ammeter: How do They Compare

If you’re wondering what aircraft loadmeter and ammeter are and what role they play in an airplane, this guide is for you.

Simply put, the loadmaster and ammeter are crucial devices for pilots as they help ensure your plane's electrical systems and components are in operating as expected. This ensures your flights go smooth as planned, without any issues.

However, most folks commonly confuse a loadmeter and an ammeter and even believe they do the same job. But these are completely different meters that play different (but crucial roles) in your airplane.

Let’s find out what these devices do and how they compare below.

An ammeter is a special device that you use to monitor the performance of the electrical system of your airplane. It helps you easily determine whether the alternator is getting enough electricity and whether your battery is receiving the charge.

But an aircraft uses fuel to fly, where does electricity come in?

While it’s true they use fuel to fly, aircrafts do have complex electrical systems for running operations like navigation, seatback TVs on passenger seats, landing lights, etc. All these rely on electricity to run! 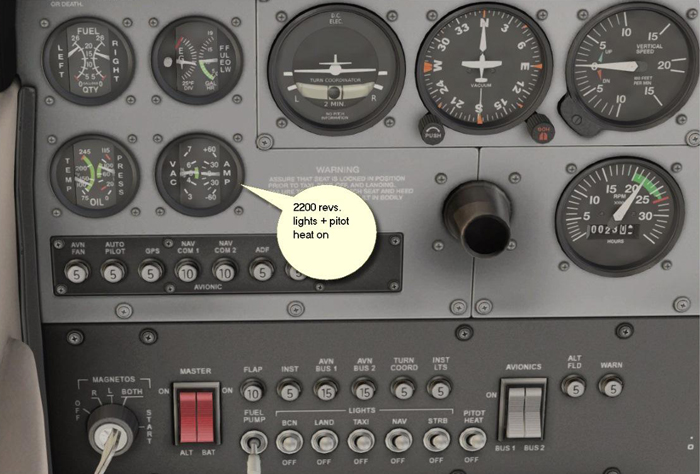 Flying a plane without electrical power means no navigation system, no landing lights, no limited communication. And this can force you to make emergency landings!

The electricity in the airplane is produced just the same way as in a car. That is, some of the energy produced by the fuel being burned goes to the aircraft alternator or generator which, in turn, converts it to electricity.

How does an aircraft ammeter work?

In ideal conditions, the needle ought to sit in the middle or slightly to the right (on the side of the positive numbers).

If the needle deflects full-scale to the negative side, it indicates an alternator/generator malfunction. 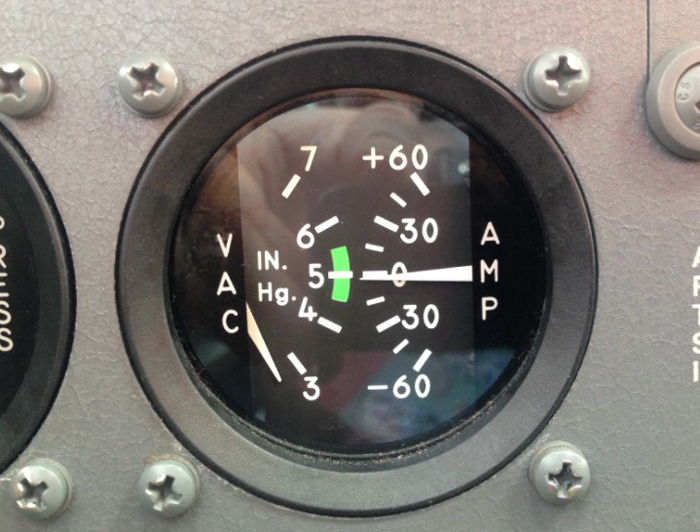 And if you find out that the needle is sitting on the far right, it means the regulator is malfunctioning! In most cases, this is an alternator overcharge case and can be become an onboard fire hazard if not fixed in time.

In either case, the underlying issues must be fixed ASAP!

Luckily, most aircrafts POHs (Pilot's Operating Handbooks) a well as commercially created lists guide you through the process of addressing such malfunctions. Also, with advanced planning and basic knowledge about your ammeter and electrical components, you can easily avoid this dire situation.

Keep in mind, though, that some aircraft feature warning lights instead of ammeters—these light up to indicate a discharge in your system as alternator/generator malfunction.

A loadmeter refers to a current meter used in the electrical systems of aircrafts to indicate the amount of current being produced by the generator or alternator. In other words, a loadmeter shows the load (in amperes) being placed on the alternator by all the plane electrical components, including the battery. 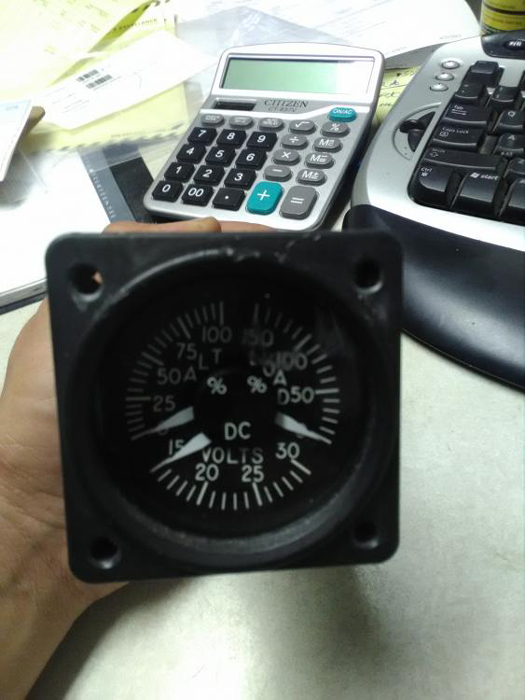 It’s essentially an ammeter that you install between your main bus and generator output in your aircraft's electrical system.

How does an aircraft loadmeter work?

A typical loadmeter has a scale beginning with zero. Its needle moves to reflect the total percentage of load being placed by electrical components on the electrical system’s generating capacity. 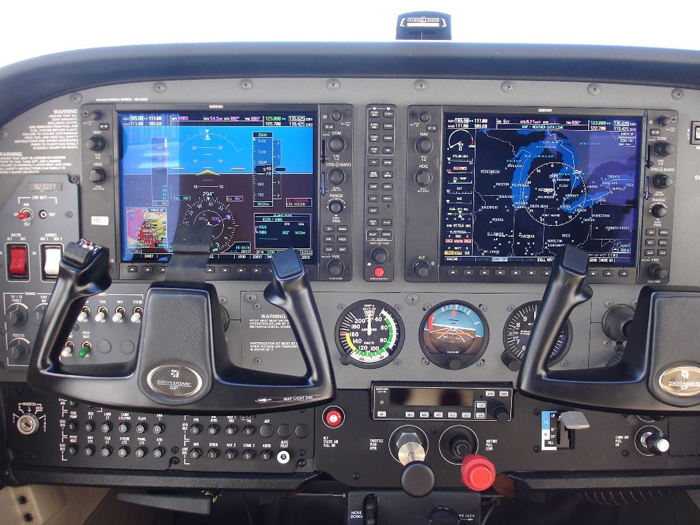 When the needle is at zero (0), it means the alternator is off or malfunctioning.

Load meter vs ammeter: are they the same?

Contrary to the misinformation and confusion out there, a loadmeter is NOT the same as an ammeter. While the former measures the amount of current being produced by the generator/alternator, the latter measures the battery charging or discharge rate.

So, what makes some pilots say that a loadmeter does the same thing as an ammeter?

Well, the explanation for this lies in the fact that you can apply a trick to use your loadmeter to check whether the alternator is charging the battery correctly.

To use a loadmeter as an ammeter:

Turn off all your plane’s electrical equipment, but leave the master switch in the ON position. Now check the loadmeter; it should show you the amount of charging current the battery is demanding (this is usually 2Amps for a fully charged battery). However, keep in mind that this trick might not be applicable in instrument flight. 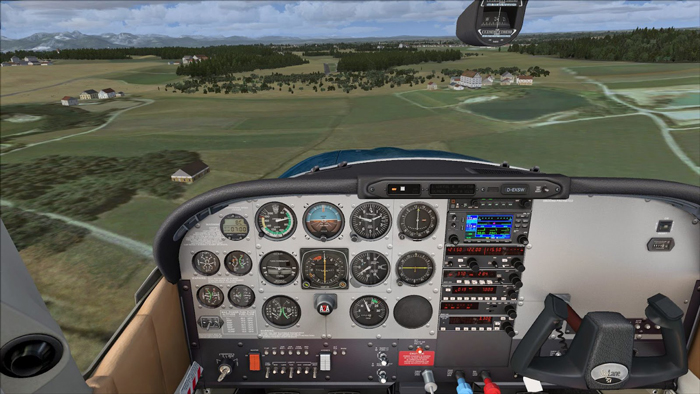 During the pre-flight inspection, focus on the alternator belt. Pay close attention to its overall condition as well as looseness. Make sure the alternator and bracket are tight and that there are no loose or disconnected wires.

If your battery is accessible, check its condition as well. Be on the lookout for any leaks or corroded terminals. If the battery has been sitting for a long time, take time to ensure its cells contain the right quality and quantity of electrolyte. 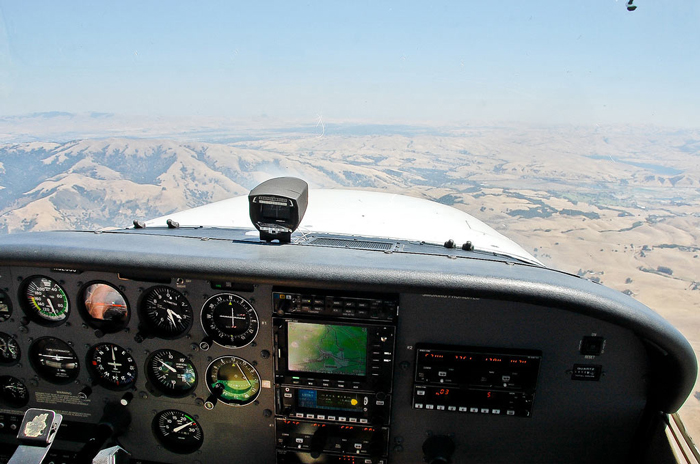 As you start your flight watch your ammeter and/or loadmeter. They should jump to the right when you start the flight and settle on the middle (for an ammeter) or on the normal position (for loadmeter). If your meter(s) doesn’t behave this way by the time you’re ready for a flight, you should be worried about the integrity of your electrical systems.

An ammeter and a loadmeter are two completely different that play central roles in ensuring your plane’s electrical systems are working smoothly. The former ensures the battery is charging correctly while the latter ensures the electrical components are being supplied with electricity. Having discussed each of these meters in detail in the above guide, we have no doubt that now you can easily tell them apart and even use them to ensure your flights run smoothly, safely, and as planned.

How To Build A Home Flight Simulator From Scratch (A Step-by-Step Guide)
Piper Archer vs Cessna 172: Which One is Right For You?
Becoming a Pilot at 30: Age Is Not a Barrier
How to Become A Bush Pilot? For Complete Beginners
How to Become a Private Jet Pilot?
CTAF vs UNICOM: Meaning and Key Differences
How Fast Does a Private Jet Fly?
How Long Does it Take to Become a Helicopter Pilot?
Top 30 Major and Busiest Airport in Europe
How Far In Advance Can You Book A Flight?