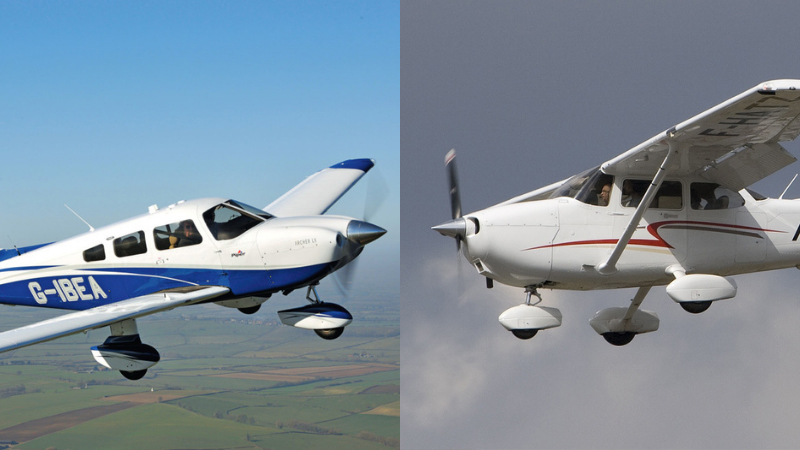 Piper Archer vs Cessna 172: Which One is Right For You?

So, you’re having a hard time choosing between Piper archer vs Cessna 172? You’re wondering which one you should choose for basic training for your PPL certificate. Or you’re thinking of getting checked in either Piper Archer or Cessna 172 but don’t know which one to pick?

If yes, you have come to the right place.

Low-wing Piper PA-28 Archer is a major competitor to the high-wing Cessna 172 in the world of airplanes. The two have been around for decades and still enjoy high popularity to this day.

Below, we’ll dig into more details about the two planes to help you decide which one is more suitable for your unique needs and flying preferences.

There are varied opinions on which of the two planes is better to fly in. Some pilots would prefer one over the other and they’ll give valid reasons for their choice. 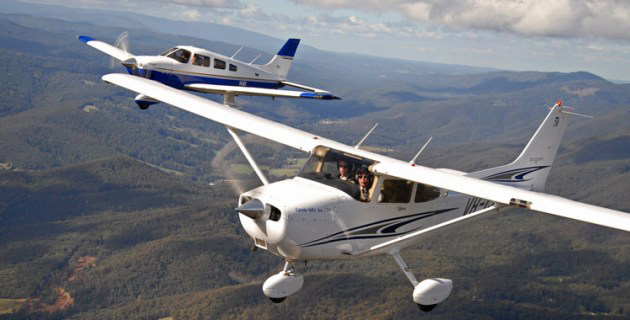 Below, we’ll compare Piper 28 and Cessna 172 side by side to help bring out what similarities and differences they might have.

BUT first…here’s a basic background about each of these planes:

One of the reasons many pilots choose Piper Archer (or PA-28 as commonly known) is the high visibility for navigation it offers. This allows passengers in the plane to easily enjoy the view or take pictures.

It comes equipped with manual flaps which retract much quicker. Many pilots love these manual flaps in Piper and the fact that the plane doesn’t require you to pick up the wing before you turn.

The low wing's single door system is a lowlight, as most people find it awkward and safety compromising.

Piper also delivers a more solid flight. It scores big points when flying with its low wing and the airliner feel to its power quadrant. The airplane is easier to fly in ground effect and more suitable for short field take-off. 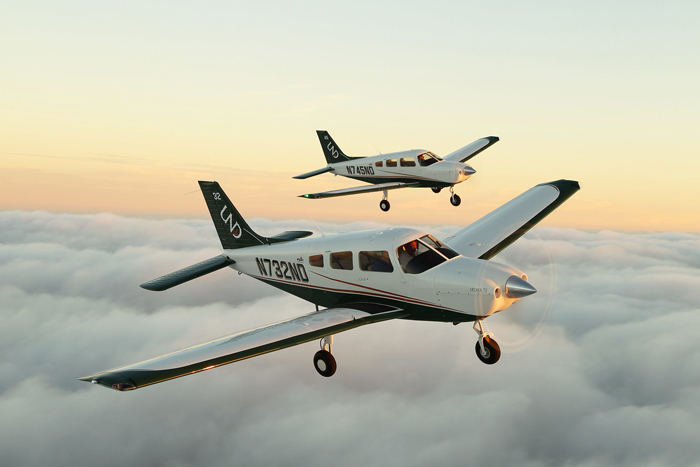 The Piper Archer engine compartments are designed in such a way that they eliminate the need for carburetor heat. You can easily spot a loose/missing fuel cap or a leaking tank.

One of the downsides of Piper is that it's challenging to get in. This is because of its one-door design which forces you to climb on the wings. It also requires a fuel pump since fuel is below the engine. You’ll need to keep switching the fuel tanks. When flying this plane, it’s hard to see other airplanes below you or the landing gear. It’s harder to check the tires and gear as well as sump the fuel tanks.

Fire and forget electrically drive flaps are it for most people. They’re considered more effective than the manual flaps in the Piper airplane. But not all are impressed with these flaps as they keep you from seeing the trim change. Plus, the fact that you have to turn the wing before turning.

The aircraft features 2 doors which translate to increased room in the cockpit. In addition to the two doors, it also features 2 windows and overhead air vents—resulting in better overall ventilation. 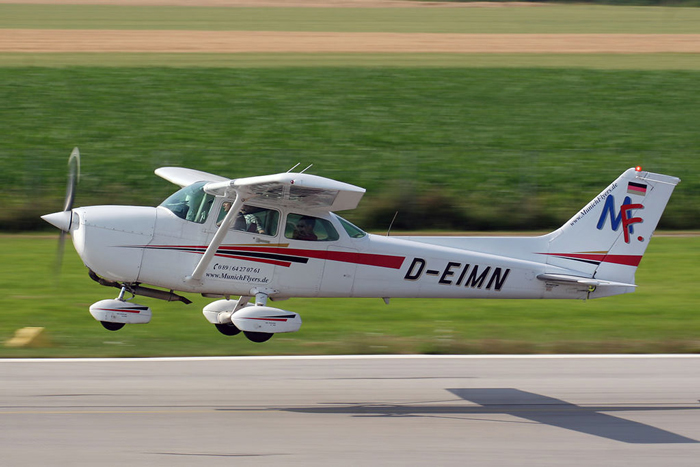 The fuel pumps are easier to sump. The gravity feeds fuel to the airplane engine, thus you don’t need to use any fuel pump.

The tires and brakes are easier to check before flying. You can also easily view 2/3 of the 172 wheels before landing.

Its trim sits right below the throttle—this is the ideal position you’d want it in on your final approach, not on the floor like in Piper Archer

If you do circuits in 172, the take-offs and landings would turn out to be considerably shorter.

With Cessna 172, you don’t have to worry about getting wet if it’s raining, thanks to its wing that acts as rain shelter. You can even put your you can set your camping tent or park your car under this wing to enjoy protection from the rains.

Other desirable features in Cessna 172 include more stability (since the center of mass sits below the center of the lift), increased ground clearance during taxiing, and more shade in the cockpit when flying in the hot summer days. 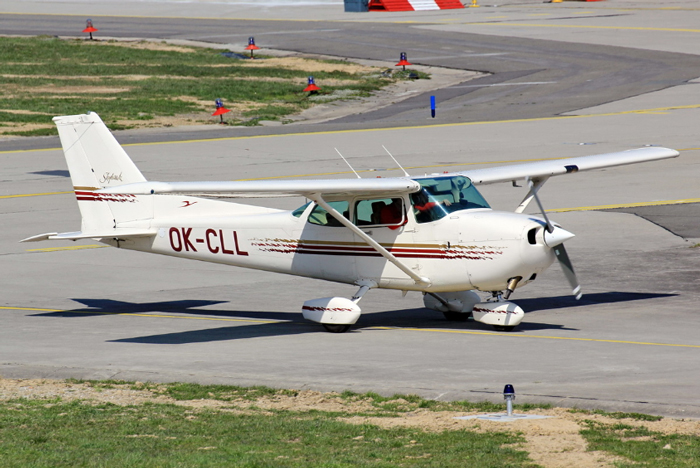 However, Cessna 172 has some downsides. one of them is that you’ll need to be more vigilant when taxiing it in high winds. It can also be a pain to self-service refueling Cessna alone.

You also can’t see the fuel caps or leaks from the top of its tanks. Seeing any aircraft above you is hard because this is a high-wind model.

Flying a high-wind airplane in ground effect is hard (this makes it ideal for short field landing).

Piper archer vs Cessna 172: side by side comparison

Piper Archer Cherokee feels smoother and more stable than 172 especially when flying in rough weather. It also tends to cope with crosswinds better than the 172. Piper offers less drag since it features no wing strut; the gear comes attached to the wing and there are no gear struts.

Piper’s amazing manual flaps make it even easier to land in crosswinds as they enable you to dump the extra lift a second before touchdown or instantly upon touchdown. This feature also promotes more accurate short field landings. 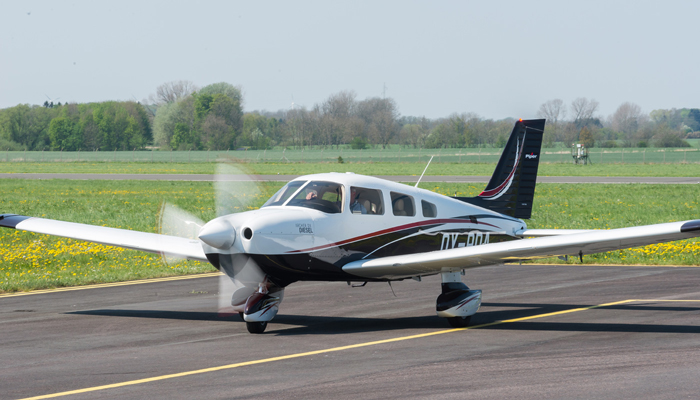 When you get a good landing out of the 172, it feels more satisfying than a PA28. Cessna is more of a flying truck. It floats forever, bounces pretty easily, and can get quirky in crosswinds.

PA-28 wins for the looks, hands down. One of the top factors influencing the sales of Piper Archer is its appearance! Most people describe its looks like those a real plane. Its nose wheel steering further gives it a more advanced looks.

However, the looks will also depend on who you’re flying with the airplane. If you’re flying young passengers, probably in their 20s, you might want to go with Piper because it features more room. 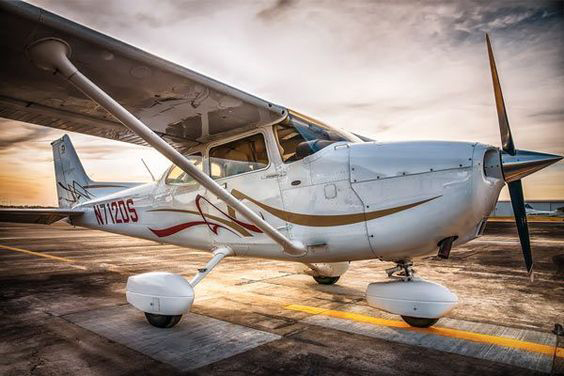 For older passengers, however, you might consider the 172 for it offers better visibility and allows them to get a good view and take photos. They care less about the aircraft's looks.

With the piper, you have to boost up yourself out of the seat and over its doorsill to get out (remember the exit is right side only) 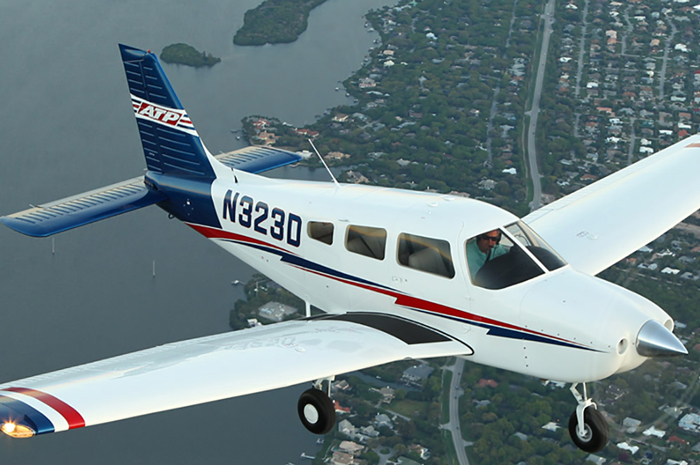 Cessna is much easier to get in and out of than Piper. Its 2 big doors design offers more utility and you can easily get in/out or load the plane.

Cessna offers you much better downward visibility because of its high wing design. If you love seeing the ground well around you when up there flying, Cessna would be your perfect plane. This type of visibility is great for aerial surveying, conducting searches, and so on. 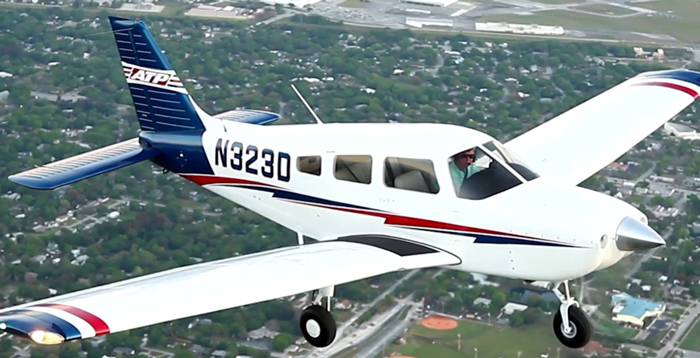 The Piper variant will offer you poor ground visibility, thanks to the low wing configuration. but it’s sure to offer excellent visibility for what’s above, including the aircraft flying above you.

Both airplanes tend to have a similar fuel consumption trend. This is true given that they both feature the same 150 HP Lycoming O320 engines. So, you should simply not choose a Cessna 172 over a Piper Cherokee (and vice versa) citing fuel consumption differences.

Both vehicles also deliver a close speed performance. There isn’t a significant difference between the places that you can barely notice when you take them for a shorter cross-country.

Safety is crucial when flying high up in the air. And although you have a huge part to play to ensure total safety when flying, you’d also want to ensure the bird you’re flying has a high safety score.

Both the Piper Archer and Cessna 172 have similar safety scores. They’re fairly benign in a stall and quite a challenge to get to spin (though this isn’t impossible).

If you plan to carry heavy loads, you should go with the Cessna 172. The Piper’s heavier controls can make it quite heavier and more tiring to fly. 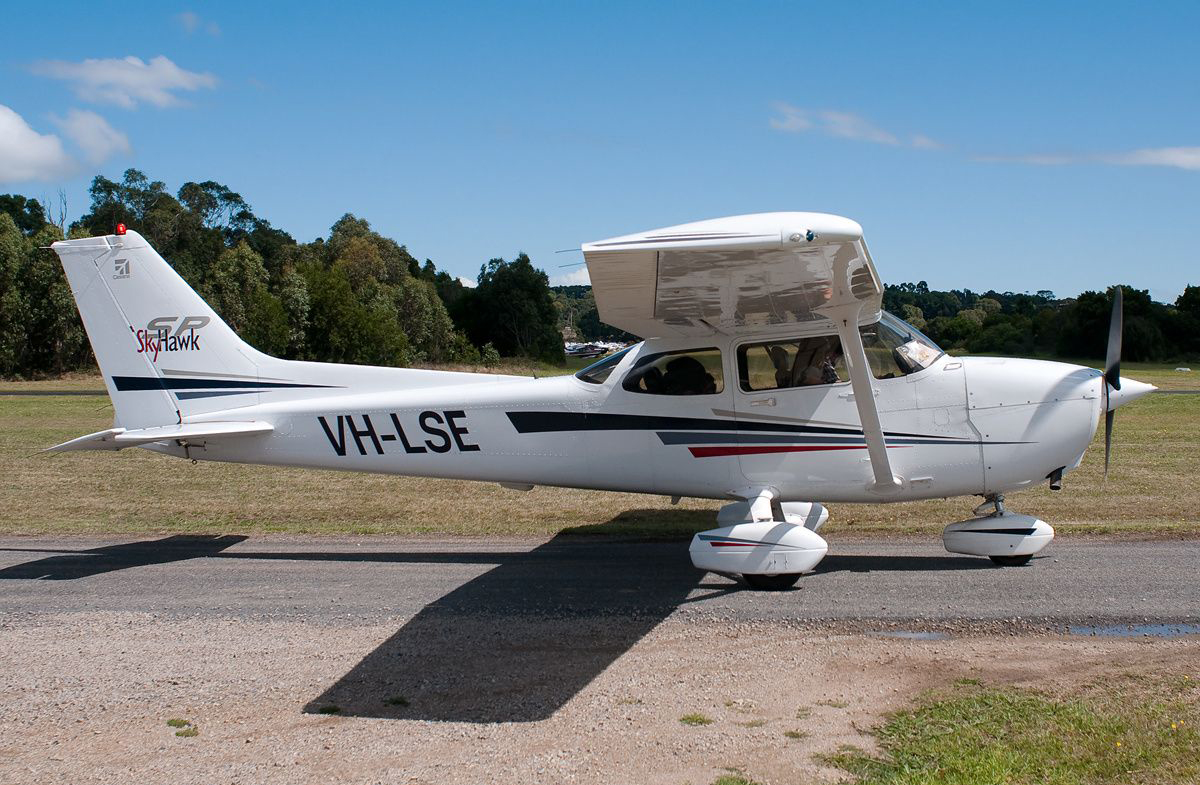 But if you still choose to fly in the PA28, then you should be sure to get a huge luggage bay that lets you carry more stuff.  Not forgetting you’ll have to remember to change the fuel tanks as well as turn the fuel pumps on and off.

That’s it for our Piper Archer vs Cessna 172 discussion. These two aircraft models are really nice and fun to fly. Both are designed to meet the same operational requirements and they do their job quite well. They are also safe to fly.

After going through this detailed comparison of the two vehicles, you should have a better idea of which of the two aircraft will be more suitable for your flying needs. Or you can give both airplanes a chance and gain firsthand experience that will help you make a more informed decision.

How To Build A Home Flight Simulator From Scratch (A Step-by-Step Guide)
Becoming a Pilot at 30: Age Is Not a Barrier
How to Become A Bush Pilot? For Complete Beginners
Load Meter vs Ammeter: How do They Compare
How to Become a Private Jet Pilot?
CTAF vs UNICOM: Meaning and Key Differences
How Fast Does a Private Jet Fly?
How Long Does it Take to Become a Helicopter Pilot?
Top 30 Major and Busiest Airport in Europe
How Far In Advance Can You Book A Flight?